The world is on the brink of a climate crisis and governments, businesses and organizations are looking for more sustainable approaches and solutions in all industries.

The agriculture industry conducts frequent research programs on animal health and hygiene as well as sustainability.

Current research, which tries to find the answer to the question: are insects a sustainable animal feed protein, has concluded so far that insect protein is one of the best and most sustainable protein feed for animals.

Archer Daniels Midland (ADM) and Innovafeed even plan on building the largest insect protein facility in 2021, in central Illinois. They have plans of harvesting billions of black soldier flies (a very extraordinary insect), whose larvae consume a large amount of organic material and process it into rich protein that can be sold as animal feed.

Why use Insect Protein as Animal Feed?

The most popular reasons to use insect protein as sustainable pet food and farm animal feed are that it has amino acids that can be easily digested. Production of insect protein is easier, more affordable, and less polluting, as insects require less space, less feed, produce fewer greenhouse gases, and are very sustainable.

Insect protein can even be considered a superfood as well. Poultry owners will be most benefitted by this protein as pigs, cows, chickens, and fish respond well to it.

Insects are even becoming a popular snack for humans. Edible species (some 2000 species) are rich in various micronutrients like iron and vitamins and are very high in protein content. For now, it is being used for research purposes, but it offers huge potential as a sustainable and protein-rich food for animals and humans.

Another benefit of insects as animal feed is that they are less prone to developing diseases, and even though they get infected by bacteria or viruses, they aren’t harmful to other animals and human beings in the food chain. However, there have been cases of allergies and anaphylactic shocks in humans after the consumption of insects, but such reactions have never been reported in farm animals.

Using insects as animal feed has numerous benefits. It is beneficial in terms of both nutrition and animal health. Many research studies are currently ongoing in this field, such as a study conducted by Wageningen University & Research, to assess whether certain insects are helpful for reducing antibiotic usage in animal feed or not.

For example, the immune system of animals can be boosted by feeding them insects and chitin, as they work as a probiotic. Similarly, it has been found in this research on the use of black soldier flies as feed for pigs, that its antimicrobial properties and lauric acid are effective in preventing diarrhea. These properties make insects a very good and interesting choice of feed, and researchers are making further developments in this field.

The most commonly and widely used insect as an animal feed right now is the black soldier fly, also called Hermetia illucens. The black soldier fly larvae contain up to 50% crude protein, 35% of lipids, and amino acids profiles that are almost like fishmeal in their dry weight. They are being used as an alternative protein source in poultry and are being fed to pigs and different species of fish and shrimps.

Rules And Regulations For Using Insects In Animal Feed 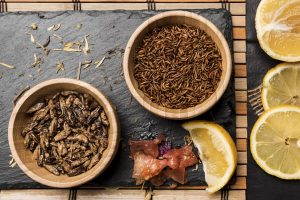 Insect production is a newly emerging sector that is growing fast in Europe. But the legislation is lagging and must catch up with this development. Insects are categorized as farm animals, and they must be fed with ingredients that are permitted for farm animals’ feed. Many issues are still being faced in this field and so far, only Aquafeed (sustainable fish and seafood animal feed), has been authorized in Europe in 2017.

Here are some products that have already been introduced to the market and are being used worldwide:

Mealworms: Mealworms are small and have high protein content. They are quite feasible and compact.

Housefly Maggot Meal: Trials have been conducted with sun-dried and ground larvae. Housefly maggots can grow on a large range of substrates and can be converted into protein and fat.

Although more research, monitoring, and reporting is required in the field of insect protein as animal feed, the results thus far have been encouraging. With the urgent climate crisis requiring more sustainable solutions, using insects in animal feed might be another step in the right direction and you can look for suitable options here: https://uk.zooexperte.com/. The pros and cons are debatable, but significant development and innovation can deliver significant changes for a world that is in dire need of more sustainable options to protect the environment. 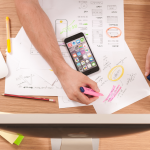 Green Living Reporter
Always on the hunt for the latest green living news, tips and stories, proudly sharing them with readers all around the world to make this planet a better place.

About Green Living Reporter 6 Articles
Always on the hunt for the latest green living news, tips and stories, proudly sharing them with readers all around the world to make this planet a better place.

Blogging has become more than a trend as many individuals become influencers through blogging. A personal blog allows an individual to share their thoughts, opinions, […]

Most of us are mainly aware of the plastic pollution that is everywhere in the media these days, but there are plenty more environmental issues […]

We are all becoming more aware of green alternatives to use in our daily lives. Whether it is the plastic bottle we buy or the […]

If you’ve ever attributed 3D printing mechanisms to a complex system used to manufacture hi-tech matter, you’re right on the money! Since the dawn of […]

Sustainable living is the big topic everyone talks about as the UN Conference of the Parties in Glasgow, aka COP26 draws to a close this […]